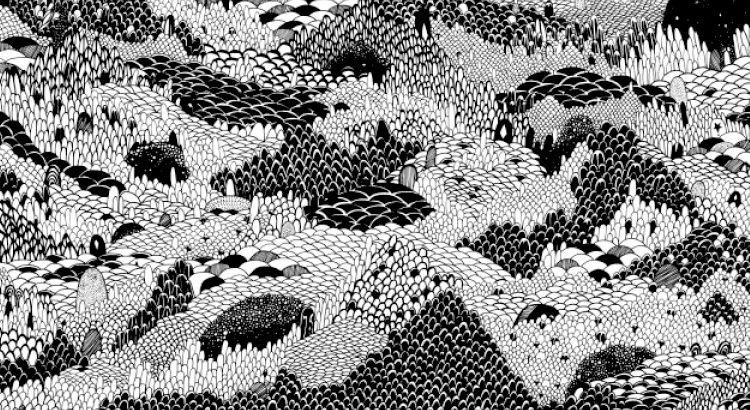 Chrysa Koukoura‘s meticulous large-scale drawings capture the inquisitiveness of youth and wanderlust, with just the right amount of oddity to draw the viewer in for a closer look. Her stripped down black and white pen works feel genuine and instinctive. From stylized cities to quirky animals to strange visions of mountains, we can sense the hand of the artist and her traveling heart. Her subjects are thoroughly studied but infused with immediacy and a nonchalant flair. The subtle abstraction in Mountainscape, Birth and Circular Mounstainscape show the charm and adventure of a young traveler wanting to learn about the world, traveling for fulfillment.

“I love the simplicity and the restrictiveness of working in black and white, as it requires me to bring something extra out of an image that wouldn’t usually be there had a color been involved.”

Chrysa was raised on the island of Rhodes, Greece, followed by the east of England. She then moved to London to study, graduating in 2009 with a degree in graphic design. Her new base is Melbourne, Australia.

Check out our favorites: An Illustrated Guide to British Birds